The first two plants in this series could be described as medium-sized. They don’t look like much from a distance. The Olympic Mullein is different. It’s big and striking. It’s architectural. I’ve seen mulleins more than 10 feet tall. Even so, it’s relatively skinny for its height, making it a perfect “statement” plant in a bed of shorter subjects, a visual exclamation point. 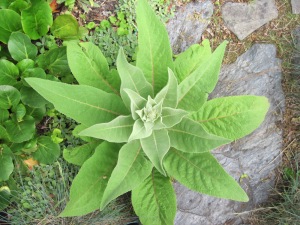 Mullein rosette from above

Most mulleins, including the Olympic one, are biennials. They spend their first year as a “rosette” of large fuzzy leaves radiating from a centre point at ground level. This rosette can take up a fair bit of space — up to 3 feet in diameter. The big leaves can overwhelm any small, delicate plants nearby, so keep that in mind when siting mulleins.

In the second spring, drama begins. A single bloom stalk emerges from the middle of the…